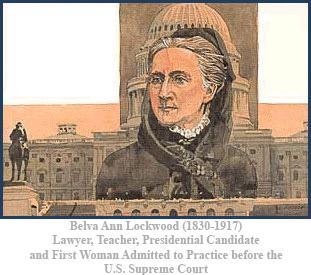 "After all, equality of rights and privileges is but simple justice." - Belva Ann Lockwood, 1888

The years following the Civil War brought with them fundamental changes to the social landscape of America. Equal rights for all people regardless of race or sex was a cause championed by a handful of brave and determined citizens who succeeded in breaking through cultural barriers and legal injustices that barred some from participating fully in society and government. One of the most spirited and indomitable of these champions was Belva Ann Lockwood.

Belva Ann Bennett (later Lockwood) was born on October 24, 1830 in Royalton, New York. Her family had neither wealth nor social standing. The standards of the time dictated that Belva would receive an education sufficient only for preparing her for marriage and motherhood, and indeed, at the age of 18 she married a promising local farmer, Uriah McNall, and had a daughter named Lura. Her marriage was to be short-lived, however. Her husband fell ill and died of consumption (tuberculosis) when Lockwood was not yet 23 years old, leaving her a widow and a mother with little means of supporting herself.

From childhood, Lockwood had shown a singular determination to achieve that which went beyond traditional expectations and limitations. As a young widow, over the objections of her friends and family, she pursued her dream of higher education without concern for "the limitations of woman's sphere as heretofore dictated by the customs of society." From 1854 to 1857, while Lura lived with her grandparents, Lockwood moved to Lima, New York to study at the Genesee Wesleyan Seminary, followed by Genesee College, the school that would later become Syracuse University.

During her years in New York, first as a student and then as a teacher, Lockwood encountered and developed an admiration for Susan B. Anthony, herself a teacher, who spoke out often on women's rights. Lockwood became all the more devoted to the cause of equal treatment for men and women and instituted a new program of public speaking and physical fitness for her all-girl students, subjects previously offered only to boys.

During her studies, Lockwood had developed a deep interest in the law. In 1866, she moved with her daughter to Washington D.C. to be a part of "this great political centre - this seething pot - to learn something of the practical workings of the machinery of government." She became increasingly involved in equal rights, suffrage, temperance, and peace organizations and opened her home and school to political meetings. While in the capital, she married the Reverend Ezekiel Lockwood, a Civil War veteran who was many years her senior. He encouraged and supported her interest in the law.

At the age of 38, she decided to pursue a formal legal education, but was denied admission at Georgetown and Howard Universities and was told that her admission to Colombian College "would not be expedient, as it would likely distract the attention of the young men." The following year, however, the newly established National University Law School began admitting female students, and Lockwood enrolled along with 14 other women. But the law was still the domain of men, and considerable opposition existed toward women with the ambition to practice law. Though she had completed her courses of study, Lockwood was not permitted to participate in the graduation ceremony or receive her diploma, an omission that would prevent her from gaining admission to the bar of the Supreme Court of the District of Columbia. After more than a year, Lockwood finally appealed directly to the ex officio president of National University, President Ulysses S. Grant, demanding that she be awarded her diploma, and shortly thereafter, it was delivered to her.

Lockwood opened a small office out of her home and later opened a small street-level firm in the fashion of Washington lawyers. Her clients were primarily blue-collar laborers, maids, and tradesmen and her work consisted of all manner of civil and criminal cases. Lockwood also handled claims against the government. In 1876, she applied for admission to the U.S. Supreme Court bar, the highest judiciary body in the nation, but was denied with the explanation "none but men are permitted to practice before us as attorneys and counselors."

For three years she single-handedly lobbied Congress until a bill passed "to relieve certain legal disabilities of women," and on March 3, 1879, she became the first woman admitted to the Supreme Court bar. Sadly, her husband Ezekiel would not witness the success of his wife. He died on April 25, 1877. In 1880, Lockwood argued Kaiser vs. Stickney before the Supreme Court; she was the first female lawyer ever to provide argument to that court.

Four years later, Lockwood again defied expectations by becoming the first woman to run a full-fledged campaign for the presidency of the United States. She believed her bid for the presidency would help women gain the right to vote. Though she garnered only a little over 4000 votes, her candidacy drew attention to women's suffrage. When reflecting upon her accomplishment, Lockwood expressed "I have not raised the dead, but I have awakened the living.... The general effect of attempting things beyond us, even though we fail, is to enlarge and liberalize the mind."

Lockwood continued practicing law into her 80s and remained a forceful and devoted supporter of international peace and equal justice until her death in 1917 at the age of 86. Belva Ann Lockwood paved the way for all women who practice law today by bravely pushing through deeply entrenched cultural boundaries that limited the potential of women.